Insecurity is the global female condition. No one is safe. Even the most glammed up celebrities that the rest of us obsess over on our vision boards are dealing with it.

We’ve all felt not good enough.

We’ve all been tagged in a photo only to look at it and think “EW” before quickly untagging ourselves. Or spent an entire 60 minute fitness class thinking “you are a disgusting blob” every time you catch yourself in the mirror and hating the girls around you who look better in their spandex.

Why though? I mean really, for who?

Have you ever thought about the contrast when it comes to our ability to alter our appearance compared to men? Let alone the expectation to do so?

Here are the options men have to become more physically appealing: go to the gym, get a haircut, buy nicer clothes. Aside from a few tweaks you basically get what you get with them.

As women, we exercise, style our hair, put on makeup and shave off our body hair. We spend small fortunes on skin care, hair products, highlights, nails, brows, lashes, and clothes. If we want to take it even farther we can get botox, fillers, plastic surgery, liposuction, laser hair removal.

Is it really a surprise that we don’t feel like it’s OK to just be as we are?

There are entire industries that exist to make money off of our insecurities. Millions of people have jobs because we are receiving constant messaging that our skin needs to glow more, or our boobs should be more perky, or the naturally growing hair on our body can’t be there. People are literally employed with the goal of making us feel shit about ourselves.

As if that’s not enough, we’ve created this weird competitive environment with other women. You could be all dolled up and super confident in how you look for a night out until you walk into the club and see a girl who you think looks hotter. Her beauty doesn’t take away from yours though, you can both be hot at the same time in the same club. So what’s the problem?

Usually, it’s a man. Maybe not even a specific man. Maybe it’s the hypothetical sexiest guy at the club that night and you want him to choose you and her mere existence makes you feel less chosen. Or maybe it’s men as a collective. We want them all to see us as desirable even if we don’t reciprocate the sentiment.

But why on earth do we want male attention so badly? Who made them the judge and jury of our value?

Life isn’t a beauty pageant, although the fact that those even exist says a lot about how we got here.

Even if you could win a category, like being the prettiest girl in grade 12 at your high school, it won’t help you in the next chapter. There will be way more girls to compete with when you get to University. And maybe you’ll get horrible acne, or develop a drug problem from being invited to so many parties. Maybe some super hot exchange student will move here from Paris and her accent and looks combined will completely knock you out of the running. Life will keep going, you’ll age, and one day you’ll realize that you can’t be the prettiest anymore. When that day comes, you’ll wish you could have spent that time and money becoming the most traveled, or the most educated, or the most philanthropic.

The point is, I get it. We were dealt a tough hand to play well here. And that’s why we need to stick together sisters.

Instead of saying snarky things behind each other’s backs, I want to be the voice in your ear that says “GIRL you look stunning! Get out there and do your thing!”

I want to be there to remind you how smart, fabulous and absolutely capable you are. To nudge you when you’re neglecting self care. To call you out when you’re talking down to yourself. To make you feel empowered enough to demand what you deserve both personally and professionally.

I want to be there to tell you that YOU ARE ENOUGH.

You’re probably not telling yourself that. The men in your life may not be either. And the media certainly isn’t.

So let’s tell each other. Let’s lift each other up. Let’s rise together. 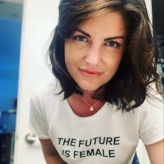