I moved to Uganda 10 years ago for a one year job in a school project. I was 27 and knew that the 9 to 5 in a German office wasn’t for me. 2 weeks into the job the volunteers I worked with took me to an orphanage home that had been started only a couple of months before by two Ugandan ladies. I was worried because I had never held a baby before and at that time the stories I was hearing really got to me every time. Children who were abandoned in front of the gate, in plastic bags on rubbish pits, in the middle of Kampala on the side of the road. I was not prepared. Nevertheless, I went along and was amazed by the incredible work of the Ugandan staff and fell in love with the babies, too. I kept on coming back.

Weekends with the children

As the children got older we spent the weekends with them and they stayed with us at our place. We went for walks, cooked, played. Eventually, I started taking Ruthi out by myself. Whenever I went to the home, it was her that I was looking for. I had found my daughter.

In March 2010, one oft he little girls at the home died. She was about a year old but her little body could not recover from the troubles it had already gone through. She was HIV positive, had tuberculosis and was severely malnourished. When Rita died, I decided I will adopt Ruthi and make her officially my daughter with all duties and obligations. I will give her the best home possible. A home that does not take her away from Uganda but that offers her to live in two countries, learn another language, getting to know my family, travel and explore the world.

But there was more.

I needed exercise, and I liked Rugby. We had seen some guys playing in Entebbe near the school pitch. So, I asked whether we could join; we were three girls initially. We joined. 2 trainings a week: lots of running, hill sprints, workouts, touch Rugby. Oh, how I loved it. After training, we talked. The guys were curious about us and we about them? We started going out together, travel to Rugby games to Kampala, but I wanted more; as always.

The fat one that can run.

I wanted to play in tournaments not knowing how bad I was at it. I went to attend my first training with a women’s team in Kampala. This is where I met my, now, best friend. The first thing she said to me totally excited: a fat one, that can run.“

I am not always a good mum. And I am still a terrible Rugby player but I love both. I love being a mum and seeing the world through Ruthi’s eyes. And I still love playing Rugby. Maybe I’ll get better at it as I go but maybe not. What matters to me is that I do it. Just do it. Just be.

Trying and failing is better than doing nothing. 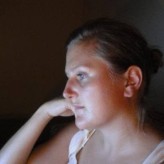